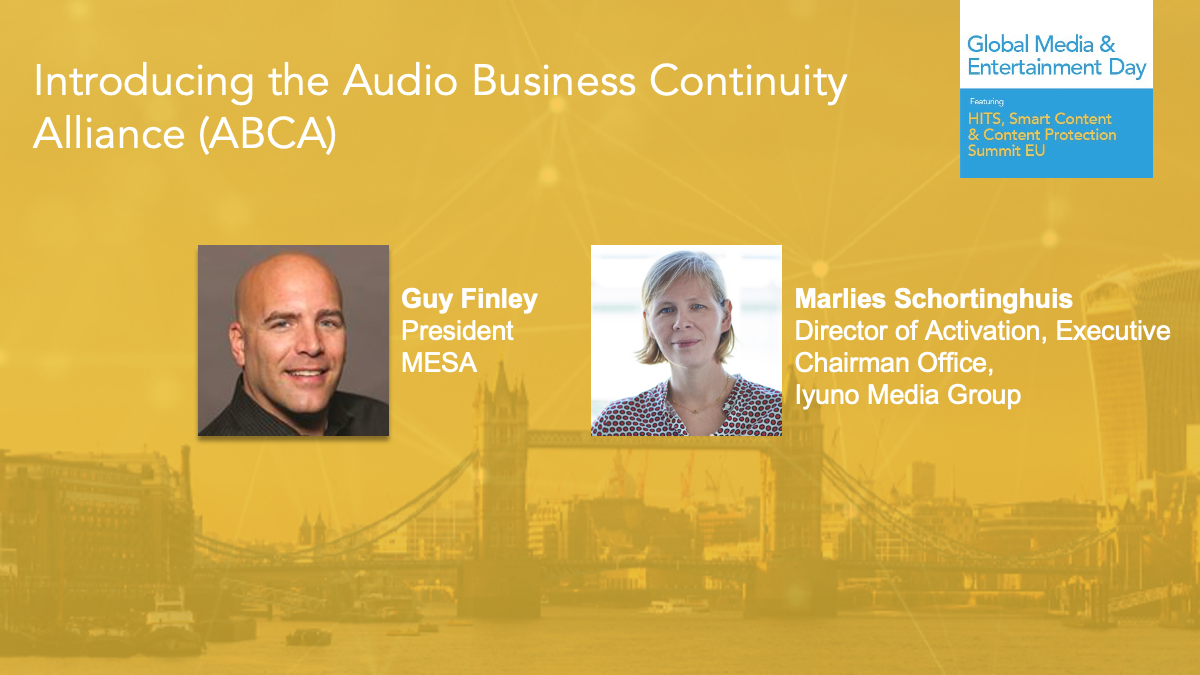 The new Audio Business Continuity Alliance (ABCA) is out to help organisations and artists who provide professional audio services overcome challenges that include the pandemic and other disruptions, according to Marlies Schortinghuis, director of activation, Executive Chairman Office at Iyuno Media Group.

“The main reason why we wanted to set something like this” can be traced back to the creation of the Trusted Partner Network (TPN), she said July 2 during the breakout session “Introducing the Audio Business Continuity Alliance (ABCA) at the Global Media & Entertainment Day event presented live, virtually, from London.

“We had all of [this] high-value content floating around and everyone saying that their security was up to scratch, but there was no one really giving a stamp of approval that everyone could get behind,” she noted.

And “the same thing started to happen with remote recording, where you have everyone trying out different solutions and, almost like MacGyver, putting things together with different sorts of equipment and, of course, the result is extremely varied and not always successful,” she pointed out.

ABCA launched publicly at the Hollywood Innovation and Transformation Summit (HITS) Live event about a month ago. It plans to administer a registry and certification programme for voice talent professionals who wish to ensure they are equipped with the necessary capabilities to continue working, during a disruption to normal business operations. All ABCA standards and certification programmes will be made open and available to all companies and individuals, on a global basis, across all media and entertainment. The ABCA will not recommend a single technology or workflow solution, but will help set the parameters that should be met to qualify for meeting the ABCA’s certification programme(s).

Iyuno looked at what it could do to help the industry, Schortinghuis said July 2, explaining: “Our ultimate aim is business continuation, but also getting the best quality available from our actors. So when we saw that every single studio was trying out their own equipment and their own workflows and solutions and delivering materials, which really weren’t always suitable. And noticing that SDI [Media] was going through the same thing as well, we decided it’s probably best to do something industrywide, for the entire industry, that everyone can benefit from.”

Executives from Iyuno and SDI joined forces and then reached out to the Media & Entertainment Services Alliance (MESA), she noted.

Why she is so “passionate” about ABCA and why she wants to be on its board and help with its work groups is “I really want to do something that is important to the industry and help form” the group and “put my own kind of stamp on it,” she told viewers.

Although ABCA “has become necessary with the pandemic,” the group can help the industry with any disruption, including blackouts or earthquakes, she noted.

For starters, “you should be able to record from home,” she noted, pointing out that all the studios’ own remote solutions up until now “seemed to rely very heavily on [the] voice talent being very tech savvy, which is not something that you would normally request of … voice talent.”

The ABCA “should provide the same assistance to the voice talents” and other members of the industry, “so if they’re not tech savvy, they shouldn’t have to be,” she said.

She did, however, concede that remote recording does bring its own unique set of challenges. For instance, if you live next to a school or highway, there may be ambient noise that is hard to filter out, she noted.

Therefore, “remote recording, even under the best conditions, is not going to be as perfect as a studio recording,” she said.

Her firm, therefore, is investing heavily in its studio and will continue to do so because, “by no means do we see remote recording as replacing studio recordings,” she told viewers.

ABCA is, meanwhile, “respectful of unions and their guidelines” also, she said. “For instance, if a union requires that there is a dubbing director and a dubbing assistant in all recording sessions, then the solutions that we as the ABCA support should allow for that…. We shouldn’t be disruptive at all.”

The plan is to have 4-5 different work groups for ABCA, she also pointed out.

What is important to note in the meantime, according to MESA, is that ABCA is just being formed now and it is socializing the idea and asking for people to come onboard and get engaged: whether its’s a content owner or a localisation company and eventually even the talent. Remote recording is here to stay and ABCA wants to be perceived as being good partners within the ecosystem. The first board meeting is scheduled for late this month.

The fourth annual M&E Day event, presented by MESA, featured mainstage panels and more than 15 breakout sessions, covering the latest it data, cloud, IT and security across the media and entertainment technology ecosystem.